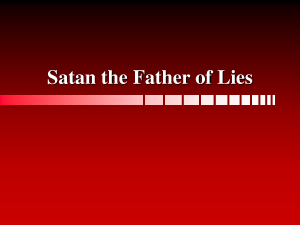 Satan’s Trick Is No Treat

“…He was a murderer from the beginning, and does not stand in the truth, because there is no truth in him. When he speaks a lie, he speaks from his own resources, for he is a liar and the father of it.” John 8:44, NKJV

For centuries, satan has tricked all of us at one time or another. I know he has tricked me more than just a few times.

He told his first lie to Eve in the Garden of Eden and he’s been lying ever since. In our scripture for today, Jesus tells us that there is no truth in him, not one word of truth in satan at all.

Untold numbers have followed his lies into alcoholism, drug abuse and pornography and the trick that he played on them was no treat for them in the end.

He tries to trick us all into thinking that sin must not be a big deal because everyone is doing it. He tricks us in more ways than there is space in this article to write about them.

Don’t be tricked by satan with his lies and deception. It will only end badly for you if you fall for his tricks.

“Draw near to God, resist the devil and he will flee from you” James 4:7, NKJV